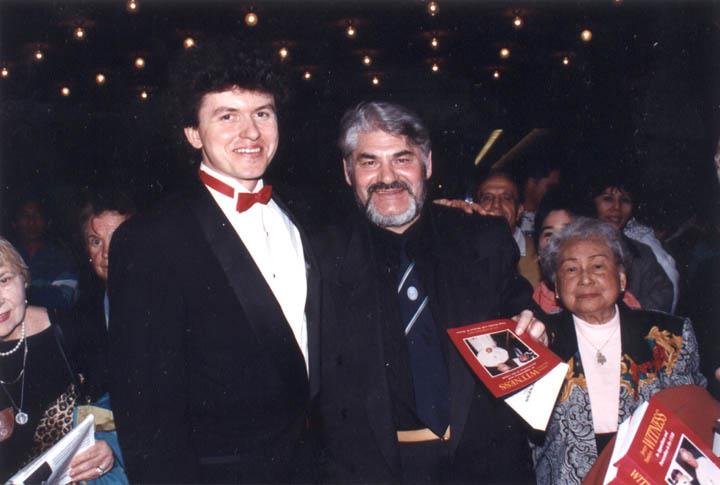 This was originally posted on Malta Network Resources back in January 2001. It is being reposted for your interest.

An ukrainian, Josyp Terelya, experienced visions of Our Lady while he was kept in the Soviet Gulags. He has in the past met with Pope John Paul II. He is now saying that unless there is radical conversion in the world, a great war will break out.

“It will be within the next thirty years, but it could also come even at the end of this year” Terelya claims. Terelya spent about twenty years imprisoned for being a Catholic. On February 12th 1970 and on the same day in 1972 he experienced visions of the Virgin Mary while he was in Special Corpus Two at Vladimir Prison north of Moscow.

Recently (January 2001 when this page was originally written) the mystic Maria Esperanza claimed that foreign countries were eyeing the United States, and two nations (one small and one big) might join to oppose America, from the inside. Interestingly, a few days only after this warning, Russian President Vladimir Putin made a historic visit to Cuba.
ADDITION ON 21st September 2001: This warning seems to have spoken of the WTC terror attack in the USA.

In his book, Witness, Terelya had accurately prophecised a vision of eight men staging a coup in Moscow, Russia. Weeks after the book came out, eight men assumed control from Gorbachov in August 1991. In visions, he saw fires all over Russia and tanks along the Amur River dividing Russia and China. Later, in 1987, Our Lady appeared to him for the third time at an abandoned chapel in Hrushiv, Ukraine. Our Lady foresaw “a large field of flames” inscribed with the names of many nations. “There is not even time to dig graves“, Mary told him, apparently. “There is no water. The heavens and the earth are on fire. Who wants to receive the grace of God should pray constantly and take upon himself voluntary penance”, Our Lady told him. “Be merciful. Remember that the Rosary will preserve mankind from sin and perdition. How many warnings must mankind be given before it repents? You can save the world by your prayers.”

Terelya is hopeful indeed, for in the former Soviet republics, people are flocking to churches, but this must be nurtured to prevent a massive nuclear holocaust. Of course one must discern Terelya’s words.

The warnings come at a time when the Jubilee was closing, and Pope John Paul II was planning visits to Ukraine, and to Malta. Months before the Pope had entrusted the world to the Immaculate Heart of Mary, following a request made decades ago by Our Lady at Fatima.

At Fatima our lady warned back in 1917 that without conversion, and this conversion is not complete yet, Russia would cause the “annihilation” of nations. This could be spiritual (atheistic, materialistic) or physical. At Fatima, a final period of peace was promised. Now, those who read the Catechism of the church know of a section which explains that in the world true (complete) peace can never come, before Christ returns in Glory. So, those who think that we are living in a special “period of peace” right now, are mistaken. The Pope himself confirmed this when he closed the Jubilee doors – he warned us not to be triumphalistic. How can you call this a period of peace when there are people dying and suffering? This is still a period of suffering and tribulations. Individual people have experienced peace, and even more will. But the entire world will know the true peace eventually. The prophet Isaiah wrote that the entire world will eventually get to know the glory of God. And do you know what that glory is? It is the Holy Spirit. It is an eventual Pentecost. When that occurs, and it is very much connected to the Triumph of Our Lady’s Immaculate Heart, it will lead to THE “period of peace”. And not necessarily immediately. Indeed there may be horrific events AFTER the warning and PRIOR to the “period”. Yet the “period” will be infinite, ever ending. Of course in the world there is and there will be those who deceive, deception. The confusion in this is allowed by God, to assist in the separation between the wheat the chaff. The best way to describe this could be “The serpent, however, spewed a torrent of water out of his mouth after the woman to sweep her away with the current…..” [Rev. 12:15-17]

The same catechism paragraph talks about the deception of believing that a period of peace can take place within the world as it currently stands. Somebody could be very interested in getting people to believe that we live in a period of peace, when in reality (as Terelya claims) a cloud of evil is encircling the world. Terelya now lives in Toronto’s outskirts with his wife, Olena and three children aged 23, 17 and 16. Terelya’s visions have not been formally investigated by the Church. He claims that the coming war will be delayed if Ukraine joins NATO (as this would bring Western arms in better striking distance of Russia). He says “There is going to be a big fight between East and West. Russia, China and Arabic countries will fight and then fight each other. Putin now has a friend in Cuba and a place for Russian submarines. The United States has let Russia consolidate its power. There will be two more world wars.”

The Pope today, January 6th, emphasised that while the Jubilee Doors were closing, the doors of God’s Mercy will never close! But one must want to accept this Mercy. God does not force it on us. What is clear is that one must, always and daily, keep looking towards Christ, worshipping Him in Spirit and in Truth and living in Christ.

[675] Before Christ’s second coming the Church must pass through a final trial that will shake the faith of many believers… The supreme religious deception is that of the Antichrist, a pseudo-messianism by which man glorifies himself in place of God and of his Messiah come in the flesh.

[676] The Antichrist’s deception already begins to take shape in the world every time the claim is made to realize within history that messianic hope which can only be realized beyond history through the eschatological judgment. The Church has rejected even modified forms of this falsification of the kingdom to come under the name of millenarianism, especially the “intrinsically perverse” political form of a secular messianism.

[677] The Church will enter the glory of the kingdom only through this final Passover, when she will follow her Lord in his death and Resurrection. The kingdom will be fulfilled, then, not by a historic triumph of the Church through a progressive ascendancy, but only by God’s victory over the final unleashing of evil, which will cause his Bride to come down from Heaven….