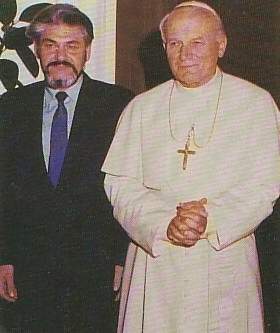 Only a few days after I reposted an older article about the late
Josyp Terelya, now there is a new story about him reporting about his recent visit to his homeland.

Josyp Terelya spent 20 years in a Soviet Gulag camp for his faith, during which time he experienced various apparitions of Our Lady the Blessed Mother as well as the Archangel Michael.

The following report was sent to me today from Josyp Terelya in Toronto on his recent visit to his beloved homeland in the Ukraine. The report reads as follows:

On August 27, 2002 two girls, Marianna Kobal age 9, and Olena Kytsur age 10, saw the Blessed Virgin Mary by the spring at Dzyblyk, a small hamlet situated between the not much bigger villages of Vilchivka and Lower Nuzhin deep in Transcarpathia.

The news quickly traveled throughout Ukraine and Russia. It did not take long before Catholic and Orthodox from all corners of Ukraine and Russia began to congregate at the place of the sightings. Ukraine and it’s Church are fighting incessant attacks from the demon that is destroying the country both spiritually and economically. These self-same attacks are observed at all places that serve as home to Christians.

When the children asked the Blessed Mother why she had come to them, the reply was as concise as it was all encompassing.

“I have come to help you, so that all may be ONE. I wish to give new life to the authority of priesthood, so that faithful shepherds may once again guide believers to the flock of my only Son. I have come to help you unite divided Christianity. I have come to save, as my Son before me, all humanity. For I will remain here until the time when all the people of Ukraine are united into one faithful herd, until sin is washed off my people. This shall be the place of spiritual and physical refinement. Remember that you now live in the times of prophecy.”

I came to Ukraine in order to be here, in this holy place, and if it was allowed by the Holy Trinity to ask the Virgin Mary about the current state of affairs and whether America will receive the gift of peace. On the 15th of February, lieutenant Mykola Kornienko and I arrived at the home of Fr. Peter Kobal, where I was to meet the two girls. With me I had brought rosaries sent by Cardinal Ratzinger and blessed by the Pope.

The girls were angelic and shined with the warmth and love of fellow Christians.

God had unified love with these children, and what is more, allowed me to be in their presence.

The Mass began after the Rosary. It was attended by more than the flock of Bishop Ivan Margitych. The Holy Trinity and all the heavenly residents along with the faithful long departed took part in this Holy Mass. The Mass recited under Dzyblyk is the epitome of what the Lord wishes for His people — it unites the attendees and bathes them in peace.

I had yet to see the Virgin Mary. In prayer and full of hope I asked her what will become of Ukraine and whether America will be washed clean of sin and gain peace. In reply I heard the quiet voice of Mother Mary.

“Ukraine has a special mission from God. It is his secret and not everyone is meant to understand it. The time will come when Ukraine will be washed clean of sin and evil. New miracles will occur here under my protective cloak. Ukraine is now bound by sin and hostility, envy and temptation. The ancient enemies have united into a common force in order to gather ten earthly kings into battle with the Lord. This is a brave plan on their behalf but it is not to pass. Prayer alone is no longer enough; in order to save your nation you must not cease to create goodness and love.”

So it was at that ten o’clock in the evening I found myself at Dzyblyk with five other kneeling worshipers and several ill residents of Lviw and far away Odessa. At this point I had been praying for three hours and Mary had yet to answer my second question. What is to be the fate of America? My answer arrived at one in the morning in the form of laudanum scented light carrying the Virgin Mother of Christ.

“You must possess humility and patience, for you also have a place in God’s plan to the changes in Ukraine,” she said. “As to America, the Americans have forgotten that God has His own plan and it is not meant to be changed by anyone.” All of earth belongs to the Lord who gave it to His people. He wants for humanity to obey and love Him as do all parents. Today’s humanity lives in the most painful of states, not only in America but in the whole world. Americans bear witness to how fallen angels, tempted by the devil, ruin family life and destroy faith and hope and love of God. And so the earth is wrought with a battle between Heaven and Hell.

America is filled with fear and instability. The American people will soon see the destruction of a capitalist system initiated by the Iraq crisis. America and her politics have antagonized the world, and that is why Russia will be able to point at globalization as America’s downfall, thus be able to successfully build up armaments.

Since the beginning of the world there has not been such a war with Lucifer.

We now bear witness to the fact that God stands with the Heavenly powers as well the faithful of the world. The prophecies are being fulfilled. You see how professional politics in the ten developed nations of the capitalist world are too busy with secular issues — how to control the people and hold unto power. These politicians do not create material or spiritual valuables.
Their political activity is an amoral acquisition of power and money — and these attract sinners. God guards humanity against any wars or killings. The time of God’s civilization is near. With the blessing of the Holy Mother, standing here before you at the gates of Heaven, America and its people will become the image of goodness and enter through the gates of the New Jerusalem and the 21st century with peace and love. Amen.”