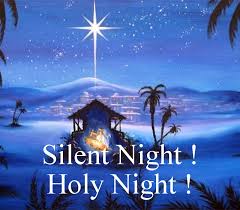 I guess we should be thankful that the organ in the little church at Oberndorf, Austria had broken down on Christmas Eve, 1818, or we would have never heard “Silent Night, Holy Night”… The legend says that mice gnawed the bellows but it is also said that the bellows rusted because of the Salzach River that flowed near the village church of Oberndorf, Austria. 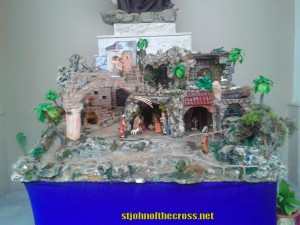 Father Josef Mohr was the new assistant priest at St. Nicholas Church ( recall that St. Nicholas is the source of the Santa legend ).  He was very worried. He was thinking of what he could use instead of the organ, in the Christmas night Mass.

With less than 24 hours left, he had no music, still.

It would not be Christmas without Christmas music.

He climbed a little mountain which was close to the town, and he had spent some time in contemplation there.

It was almost midnight on December 24 1818 when he entered his room.

With heavenly inspiration, he wrote down a new song which could be played on a guitar.

Snow fell softly outside his window as Father Mohr wrote the opening lines to “Silent Night”.

All is calm, all is bright.

Round yon Virgin Mother and child!

Holy Infant so tender and mild,

He imagined the Shepherds at the birth of Christ, the Magi bringing Him gifts. With this joy he wrote:

Radiant beams from Thy holy face,

With the dawn of redeeming grace,

Jesus, Lord, at Thy birth.

He slept well that night. On early Christmas morning, Father Mohr rushed to his friend Franz Gruber’s home. He gave him the verses he wrote

and asked him to set it to music. Gruber, an accomplished musician, was the church organist on Sundays.

Only a few hours later, Herr Gruber had already set Father Mohr’s verses to a melody arranged for two solo voices, chorus and guitar. Father Mohr sung tenor and Gruber sung bass, when “Silent Night” was heard at the Mass the same evening for the first time.

With the composers’ permission, the organ repairman who came to repair the organ gave a copy of the new hymn to the Strasser sisters, a sing troupe, much like the Trapp Family Singers in “Sound of Music”, whose specialty was Tyrolean songs. In 1834 the Strasser family played it for the king of Prussia, who wanted his cathedral choir to sing it every Christmas Eve.

As the sisters toured Europe and sang “Stille Nacht”, people took it to their hearts.

The story behind the composition of Silent Night was lost, however, as nobody seemed to know who wrote the words and music. The Oberndorf village was very obscure, high in the Bavarian Alps, and Father Mohr & Franz Gruber were equally as obscure.

There was even a rumour that Michael Haydn, younger brother of the famous Franz Joseph Haydn, had composed the melody.

The matter was not settled up until 1854, almost 4 decades later, when the son of Franz Gruber showed a copy of the original manuscript to a government investigating committee from Berlin.

Father Mohr had died in 1848 of pneumonia, without knowing of the worldwide fame of “Silent Night”, his only hymn to be translated into English. But Franz Gruber was given recognition as the composer of the world’s best loved Christmas Carol since he still had the original manuscript.

Interestingly, St. Nicholas’ church fell to floods nearly a century ago, but the Stille-Nacht-Kapelle, a small memorial chapel completed in 1937, stands on the site.

A Collection of Christmas Ideas

Let It Snow at the Plaza Part 2

[…] The Story of Silent Night | Malta Network Resources He was very worried. He was thinking of what he could use instead of the organ, in the Christmas night Mass. With less than 24 hours left, he had no music, still. It would not be Christmas without Christmas music […]