[UPDATE – The websites were all updated thus will not be labelled unsafe!] 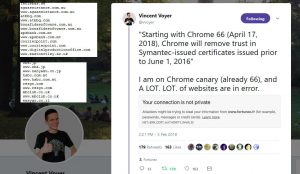 According to computer security engineer Arkadiy Tetelman, who works at Airbnb according to his blog, out of one million websites he tested, just 11,510 are going to go be labelled unsafe in April, with 91,627 which will be blocked next October.

As the register explains, “thanks to a decision in September by Google to stop trusting Symantec-issued SSL/TLS certs, from mid-April Chrome browser users visiting websites using a certificate from the security biz issued before June 1, 2016 or after December 1, 2017 will be warned that their connection is not private and someone may be trying to steal their information. They will have to click past the warning to get to the website.”

I wrote to APS Bank, Lidl Malta and Next Malta via Facebook to let them know of this. HSBC does not allow messaging.

UPDATE: APS Bank and Lidl wrote to me informing me that they are working on the issue. Great news!