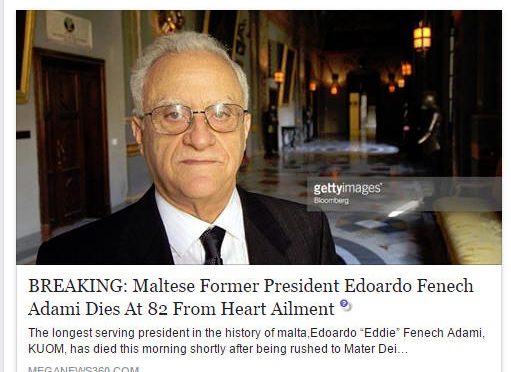 UPDATE: Details of a NEW VERSION of this Hoax. 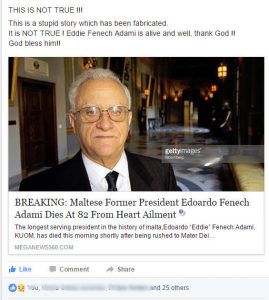 “The longest serving president in the history of malta,Edoardo “Eddie” Fenech Adami, KUOM, has died this afternoon shortly after being rushed to Mater Dei Hospital,following long battled heart ailment.

Former president Fenech Adami, born on 7 February 1934 was a Maltese statesman and Nationalist politician who served as Prime Minister of Malta from 1987 until 1996, and again from 1998 until 2004.

Subsequently he was the seventh President of Malta from 2004 to 2009. He led his party to win five general elections, in 1981, 1987, 1992, 1998 and 2003. Staunchly pro-European, Fenech Adami was the longest serving Maltese prime minister since Malta’s independence, and was fundamental for Malta’s accession to the European Union.

Originally a lawyer, Fenech Adami was co-opted Member of Parliament (MP) in 1969.He served in a number of senior party positions, including president of the Administrative and General Councils, and was elected to succeed Dr Giorgio Borġ Olivier as party leader.

From April 1977 onwards, Fenech Adami led the Nationalist opposition in a campaign of civil disobedience against the Mintoff and Mifsud Bonnici administrations of the late seventies and eighties, focusing on a message of respect for democratic principles and human rights.

With the wife,Mary Fenech Adami already deceased on 8 July 2011, he left behind five children,namely John, Beppe, michael, Maria and Luigi.

Our sincere condolence to the bereaved family and the entire maltese community.”

Truth: It’s a hoax. First of all they got the name wrong. President Eddie Fenech Adami is not dead. Net Tv had a live call to his son who confirmed that his father is very much alive.

In January 2017, Winston Amankah posted an updated version of this Hoax on the Facebook Group Archdiocese of Malta-Unofficial Page.

This time it says:

“The longest serving president in the history of malta,Edoardo “Eddie” Fenech Adami, KUOM, has died of food poisoning.

Mr Edoardo Fenech was rushed to St Luke’s Hospital, located at Valletta, malta after bitterly complaining of stomach pain just a week after taking family Cavalry at a pub in Valletta.

‘Team of doctors including myself worked tirelessly to control the situation at the but all efforts put up proved futile’-Dr Emerson Ricardo said.

According to Dr. Emerson Ricardo, the cause of his death is not explicitly known as the body is deposited in the morgue for autopsy but the best guess at the moment could be food poisoning.

Police has also assured the public and all sympathisers that indeed investigations are underway to find the root cause of this sudden demise.”

HOAX: Ikibu Island Discovered Off the Coast of Malta