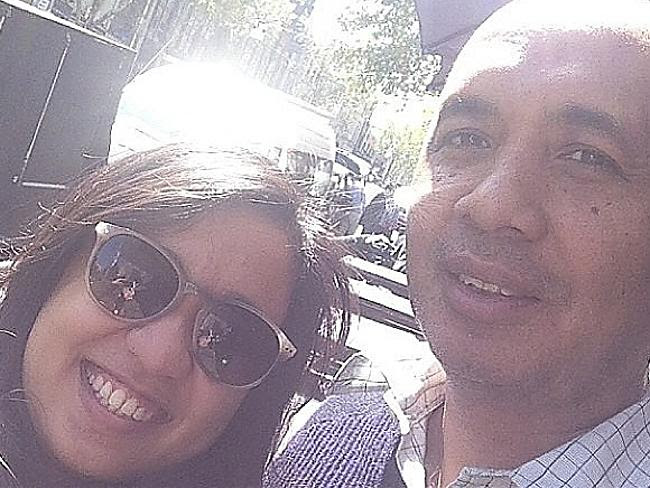 There have been lots of conspiracy theories, some of them even posted by newspapers..

Since NSA can go back and retrieve the past 100 days of mobile call conversations in all non us-countries, why don’t they do this for the passengers and the crew?

The way the Malaysian airlines seem to be handling it is odd. The BBC reports they are not allowing the relatives to talk to journalists.

It seems there is more that they are not sharing.

Another odd happening was the mobile phones of passengers which kept ringing for a few days. And though there was an official explanation that due to the phones would keep getting a ringtone, there was a passenger’s mobile tracked to Kansas City of all places.

The daughter of the pilot Captain Zaharie Ahmad Shah made a video with music from Wizard of Oz (Kansas again!)..

The video starts with these words: “A tribute to a man well loved by many. Captain Zaharie Ahmad Shah, the guy we all call Ari, Uncle Ari and Tok Mamu Ari.”

It shows CCTV footage of the pilot walking through security checks at the Kuala Lumpur International Airport before boarding flight MH370.

The rest of the slideshow, shows a younger Zaharie.

The video ends with the plea and prayer: “Please come home, we miss you. Uncle Ari, we patiently and anxiously await your safe return, along with the rest of your crew members and passengers. Insyaallah.”

The suicide theory doesn’t hold water when you see the videos this captain had uploaded on YouTube such as how to fix your air conditioner. He was concerned with the world around him.
There is a related article by Maltese Blogger Daphne Caruana Galizia.
Also, the onboard computer had been changed to fly West 12 mins before the last comms of ‘goodnight’.

A recent news report by Tomonews is about the last phone call Captain Zaharie made before the plane left. The phone number, from which the phone call was made, was bought under the stolen identity of a woman, Malaysian authorities told Mail Online.
The telephone conversation, between Shah and the unidentified person before the flight, lasted for about two minutes and it was one of the last conversations.
The authorities appear to be giving much weight to the phone call as it was made from an unknown pay-as-you-go SIM card number in Malaysia.

Hishammuddin Hussein, Malaysia’s transport minister, said Thursday night at a secret meeting in Kuala Lumpur with Malaysia Airlines Flight 370 passengers’ families that he believes all the passengers are still alive. This has been reported by Associated Press, The Guardian and CBS News.

CNN’s Richard Quest had interviewed the co-pilot a few weeks before…
http://www.youtube.com/watch?v=R8C96SxyzzQ

There are some plausible theories online.

That is, besides the understandable comparisons with the LOST tv series, which can be found here and here.

A better post points out similarities, people with fake passports, the diverted flight path and location where both fictional and real planes disappeared (over an island not on the map), and even the following:

She made reference to an academic paper and hacking app by Hugo Teso about hacking planes but the author himself on twitter said he did not believe the plane was cyber-hijacked.

On the other hand, Boeing was working on fixing a vulnerability in Boeing 787 and some 777’s – essentially anyone onboard using the wifi could potentially abuse their control system, after Teso’s paper and after a back-door was found by two Cambridge researchers which could allow the Boeing’s chip to be taken over from the Internet.

The US Federal Aviation Administration which regulates all aspects of US civil aviation, in November 2013, it issued the following ruling in relation to Boeing 777-200er planes:

“The proposed architecture is novel or unusual for commercial transport airplanes by enabling connection to previously isolated data networks connected to systems that perform functions required for the safe operation of the airplane. This proposed data network and design integration may result in security vulnerabilities from intentional or unintentional corruption of data and systems critical to the safety and maintenance of the airplane. The existing regulations and guidance material did not anticipate this type of system architecture or electronic access to aircraft systems. Furthermore, regulations and current system safety assessment policy and techniques do not address potential security vulnerabilities, which could be caused by unauthorized access to aircraft data buses and servers.”

“The architecture and network configuration in the Boeing Model 777-200 may allow increased connectivity to, or access by, external airplane sources, airline operations, and maintenance systems to the aircraft control functions and airline information services…..Previously these functions and services had very limited connectivity with external sources.”

We do know that the Boeing 777 reached ground level from the satellite pinging data which didn’t require a subscription, as it’s a basic international safety requirement on these new(er) aircraft.
The ping timings got longer,’ Inmarsat spokesman Chris McLaughlin stated via email. That is to say, at each stage of its journey, the aircraft got progressively farther away from the geostationary satellite’s position, located over a spot on the equator south of Pakistan, and never changed its heading in a direction that took it closer—at least for very long.
The aircraft didn’t send pings to the Inmarsat satellite, instead it replied to pings by the Inmarsat satellite. It’s an important detail: That’s how we know the roundtrip times.
The data however itself has NOT been released publically.

While Malaysian PM has declared MH370 crashed in south Indian Ocean, relatives are still demanding proof – pieces of wreckage. Will bodies be found? What is the proof? Just satellite pinging data?

Another theory by Keith Ledgerwood asks whether MH370 disappeared by hiding behind SIA68 (another Boeing 777).

One popular theory online states that the plane was probably hijacked by a US AWACS, which blocks radar and other signals, and the plane was taken to Diego Garcia, which is an island run by the UK and US armies, curiously at the same place where the last pings were sent by the plane to satellites. It’s interesting how the BBC mentioned a lot of theories available online, but has ignored this one. Why?

Diego Garcia is close to the Maldives where some people were reported to have seen the missing plane fly, as you can see: On board the plane were 20 engineers – employees of Freescale Semiconductor , a Texas firm – who worked on electronic warfare,  radar-blocking technology, as reported by the International Business Times.

Do you have any more ideas / theories / information?